Since 1961, CEBAT has been a close partner to its customers

As a very dynamic company, CEBAT strength lies in the synergies between its markets and the focus on customer satisfaction.

0+
CEBAT TEAM
0+
COMPLETED PROJECTS
0%
SATISFIED CUSTOMERS
0
SERVED COUNTRIES
0+
PER YEAR
1961
CEBAT is born
In the wake of the economic boom and the growth of infrastructure investments in Rome, and after many experiences in the field of public lighting realized during the 1960 Olympic Games, Nello Montanari decides to found CEBAT S.r.l. that immediately becomes a reference companyfor the Roman municipal utility company (ACEA), with the execution of important and prestigious public and artistic lighting projects.
1990
Alessandro, Mauro e Claudio
The leadership of the company finally passes to the sons of Nello Montanari and Liliana Costa. The brothers Alessandro, Mauro and Claudio position the CEBAT brand as a highly professional and efficient company.
1996
The new headquarters
With over 600 sqm meters of offices, 2,500 sqm of warehouses and 5,300 sqm of open areas, the new headquarters makes of CEBAT one of the most important companies in Central Italy.
1999
San Giacomo Hydro Plant
It is the year of ” San Giacomo di Vomano” (today “Hydroelectric Plant Ignazio Silone”), one of the most modern hydroelectric plants in Europe, with a key role for the entire Italian HV network. The scope of this unique revamping project included the construction of two 380 kV connections, including the design and supply of metal structures, with cable laying and bracketing along a 600m deep vertical shaft
2011
SA.PE.I.
“SA.PE.I.”, Terna’s new submarine link between Sardinia and the Italian Peninsula is commissioned in July.SA.PE.I. is the most important and technological HV power line ever built in Italy, connecting Sardinia to Latina, on the Lazio coast, with a double submarine HVAC cable at 500 kV. SAPEI is a record breaking project: at 1640m water depth SAPEI, the deepest ever reached in the world; with a length of 435 km long, the longest in the world for 1000 MW. On behalf of PRYSMIAN, CEBAT performed the civil works and laying of the onshore underground cables on the Italian Peninsula side.
2012
Nicola e Federico
As a testimony to family commitment and tradition, Dr. Nicola and Federico Montanari join the CEBAT Management Board.
2015
CEBAT enters the water sector
First important contract in the water sector, for ACEA, the largest water distribution company in Italy. The contract, with CEBAT as part of a consortium, provides for the maintenance of a sector of the large urban and extra-urban water network of Rome.
2015
Italy-France HVDC Link: world longest HVDC link
The “Piemonte – Savoy” project confirms the importance and role of CEBAT in the construction of HV distribution networks.The world’s longest HVDC underground cable, expected to be commissioned in 2021, will play a strategic role in increasing the security of electricity supplies and enabling energy exchanges between Italy and France of up to 1200 MW in both directions.
2016
CEBAT becomes a Global Service MV / LV operator in the electricity sector
Award of an important contract by ACEA that consolidates the position as the reference player in Central Italy.
2017
ENEL chooses CEBAT for the Global Service in North Campania
The MV/LV segment becomes one of the pillars of the company.
2019
CEBAT reaches the Dolomites
CEBAT is awarded a prestigious contract for Terna for a 170 kV connection for grid resilience and  landscape  improvement in view of the Cortina 2026 Winter Olympics.
2019
Oaktree Capital invest in CEBAT
The US Private Equity fund, specialized in energy investments, joins the Montanari family to consolidate the positioning of CEBAT achieved in the recent years and expand CEBAT into new markets and customers.Domenico D’Elia, a veteran of international contracting with experience in Technip, Tecnimont, APS, Air Liquide E&C, is named Chief Executive Officer.
2020
CEBAT is in the air
ACEA awards the first contract to CEBAT for the construction and the rehabilitation of High Voltage Overhead lines.
2020
CEBAT lands in Greece
Vinci Energies chooses CEBAT for over 3km of Horizontal Directional Drilling for two 150kV circuits in Aktio. 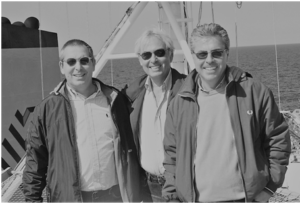 Since 1961, CEBAT has been a close partner to its customers
CONTACTS